How itGenius’ Peter Moriarty Acquired 3 Companies in Just One Year 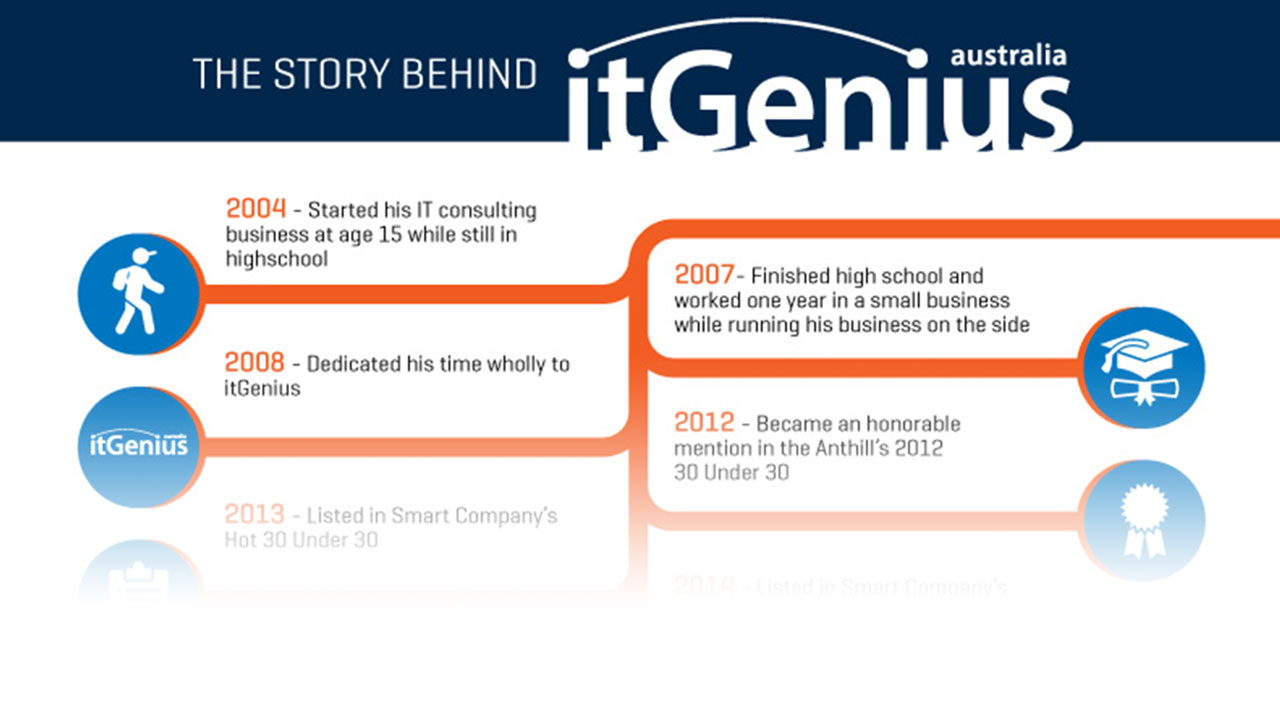 What if your father bought home some computers one day and told you “you can have it to play with your brothers”. But the catch is, you have to fix it first.

When Peter Moriarty’s dad did that, he and his brothers took out a book from the local library and learned how to fix it and they get it up and running. That marked the beginning of his love affair with technology.

Almost two decades later, Peter is now the Director of itGenius Australia, an IT Consulting firm based in Sydney which is one of Google’s Top 5 Partners in Asia Pacific. But his consulting business actually started when he was still just a teenager in high school.

Even at a young age, Peter Moriarty already had an entrepreneurial spirit. In a recent interview with The Sydney Morning Herald, he recalls an amusing anecdote growing up. “I pretty much started selling anything I could get my hands on including really shiny stones found in my neighbour’s letterbox, sold for about 50 cents.”

When he was 15, he chose a different route from his friends who worked at McDonald’s. Armed with a backpack and push bike, he fixed computer problems in his neighbourhood. This kidpreneur was slowly laying down the foundation for his future business. Several years later after graduation, he dedicated his time to nurturing itGenius.

The Early Years of itGenius

In the first few years of his business, Moriarty focused solely on IT Services. itGenius sold servers, set up networks for people and provided customers with traditional IT Support. Peter, however, noticed that the market was gradually shifting towards cloud services. So he decided to pivot his business model, and it’s fortunate that he did.

The transition was tough. It meant a dip in profit and Moriarty confessed that they’ve had a couple of really challenging years. But his gamble paid off. The company now makes most of its revenue by consulting to directors and managers of small businesses about Google Cloud and its useful business applications.

Since discovering his passion for technology, Peter is very vocal about how it can change business and how it can be leveraged to drive growth.

“My passion is to help change people’s mentality and get them to use technology as a tool to actually drive their business forward. Whatever I can do to promote that, whether it’s speaking to business education groups or at industry events, whatever I can do to get that message out there I will do because I’m passionate about it.” Moriarty said in an interview with Smart Company.

Peter’s hard work caught Google’s eye and his itGenius team received mentoring. But the internet giant is not the only one that took notice. In 2012, Peter was an honourable mention in Australian Anthill publication’s 30under30, which pays tribute to outstanding young entrepreneurs to promote entrepreneurship.

Smart Company also featured Peter in their Hot 30 under 30 List, which highlights 30 young Australian entrepreneurs. It pays tribute to smart and successful business men and women who are making their mark in their own way. The itGenius Director is included on the lists in 2013 and 2014 and most recently in 2017. The most recent inclusion may have something to do with the acquisitions that itGenius made last year.

In June 2016, HostGenius, the web hosting arm of itGenius, acquired smaller rival Speedhost. That meant a 40 percent increase in their then customer base. Four months later in October, Moriarty made a call – one of many – that allowed him to clinch a crucial deal. Later he acquired his biggest competitor, Chromeworx in just 48 hours. The deal included acquiring not only Chromeworx’s customers and assets, but also recruiting its staff members.

Moriarty knew there was value in Chromeworx’s customer base. But what he didn’t realise was that attaining it wouldn’t be as easy as he thought. Many already signed up and paid for a year of customer and technical support up-front. Chromeworx’s sudden liquidation left them hanging without any solutions.

Peter struck a new deal, this time with Chromeworx’s customers. He offered to fulfil the services that they already paid for in advance to Chromeworx if they signed up with itGenius for the next year. Moriarty knew that building trust early on was key in maintaining this customer base.

In December 2016, itGenius acquired Cloud Logic, their third acquisition for 2016. This latest addition to the itGenius stable now brings their end-user licence count to almost 12,000. Moriarty maintains that their focus is still to be the top Google Partner for SMB across Australia and New Zealand.

For the last year, Peter also put focus on bringing Dialpad to Australia and New Zealand. The 100% cloud-based business phone system tightly integrated with Google Cloud promises to do away with the old-school desk phone. It allows the modern ‘anywhere worker’ to bring their business extension with them via the computer, mobile or tablet.

itGenius is currently Dialpad’s primary partner for ANZ and they have signed up 250 customers in their first 12 months of the product being available locally.

Principles to Live By

Moriarty believes in giving back. Earlier this year in March, he joined the 500km charity bike ride across Thailand to support our partner charity, Hands Across the Water. SmBiT Professionals of which Moriarty is a member of, proudly supported his cause. Together with the other riders, Peter helped raise over $1,000,000 for the charity which funds orphanages in Thailand who were left without a family after the Boxing Day Tsunami back in 2004.

When it comes to technology, Moriarty’s philosophy is to keep it simple. He also lives by the quote, “Any intelligent fool can make things bigger, more complex, and more violent – but it takes a touch of genius — and a lot of courage — to move in the opposite direction.”