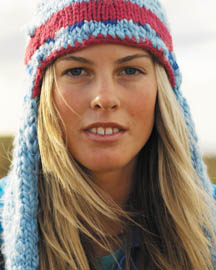 Torah Bright was born in 1986 in the NSW town of Cooma, at the gateway to the Snowy Mountains. She strapped on her first pair of skis when she was just two years old, following in the wake of her three older siblings who were ski racers. A poor snow season when she was eleven prompted Torah and her brother to give snowboarding a go – and she’s never put skis on again.

Within two years Torah was on the podium in open women’s competitions in Australia, and she won a bronze medal in the Halfpipe at the World Junior Championships the following year. It was the 2003/2004 season which saw Torah emerge as one of the world’s leading female snowboarders as she took the leader’s bib in the FIS World Cup ratings after the third round of her first WC season. In 2006 Torah overcame a shoulder injury to finish fifth in the women’s Halfpipe competition at the Winter Olympic Games in Torino, Italy.

Torah aims to raise the bar of female snowboarding, demonstrating that there are wonderful ways to find fun and challenge in a beautiful world. Her goal is to help people realise how important they are individually and how every choice we each make matters.

Torah’s vibrant, vivacious spirit and personality, approachable nature and strong sense of principle have made her a popular international media star. She has featured in international television campaigns, on billboards, in newspapers and magazines all over the world as well as featuring in the Microsoft XBox Game, Amped 2.