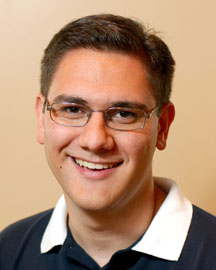 Tim Goodwin was born in Adelaide in 1983 and grew up in Canberra after his father was posted there with the Army. He is currently completing studies in Arts/Law at the Australian National University.

Growing up, Tim’s mother always taught him about the importance of his Aboriginal heritage and culture, but it wasn’t until he attended the World Indigenous Youth Conference when he was fifteen that he finally felt that he belonged to something greater than himself. Since then, Tim has been an active member of Aboriginal youth affairs.

In 2002, Tim was chosen as one of five young people to ask a question at the Inspire Foundation’s Audience with the Dalai Lama, and he was one of two youth members of the Australian Delegation to the United Nations General Assembly’s Special Session on Children in New York. While there Tim met children from around the world who were achieving amazing things in war zones and poor populations. It inspired him to return home and work for the betterment of Aboriginal children who often face many of the same problems as those in Third World countries.

Tim is currently an Indigenous Education Ambassador for the Department of Education, Science and Training, and a member of the National Indigenous Youth Movement of Australia (NIYMA), which aims to create healthy, strong and free indigenous communities by working with young indigenous people and providing safe spaces for young people to share, learn and be proud of their identity.

Tim plans to continue working in the area of social justice, and hopes to use his university qualifications to work for the betterment of the Aboriginal people. He also is intent on travelling the world and seeing the diversity of cultures that the world has to offer!