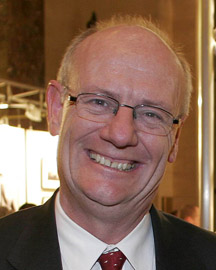 Tim Costello was born in Melbourne in 1955, the eldest son of two secondary teachers. He grew up in Blackburn and went to Carey Baptist Grammar in Kew, where his father taught politics and history. He loved sport and excelled at high jump and football.

In 1973, he went to Monash University and studied law. He worked as a lawyer for three years before going to study theology with his wife, Merridie, in Zurich, Switzerland, during which time they travelled extensively throughout Europe. They returned in 1984 and Tim became a Baptist minister in St Kilda and was ordained at the end of 1986.

Tim came to public prominence as mayor of St Kilda in 1993, when he was an outspoken opponent of some rigorous changes made to local government under Jeff Kennett’s premiership. He has become known as a spokesperson for those with no voice including the homeless, the urban poor, the drug and alcohol addicted and, perhaps most significantly, the growing number of problem gamblers. In 1995, Tim created a not-for-profit organisation, Urban Seed, which worked with the marginalised of the city. His team ran a daily luncheon program and various means of support and advocacy.

At the beginning of 2004, Tim was appointed chief executive of World Vision Australia. This meant he was at the helm of Australia’s largest relief and development organisation when the Asian tsunami hit. He continues to work with World Vision, which includes spending at least one quarter of his year overseas visiting projects and conferring with partners.

Tim and Merridie live in Elsternwick with their young adult children, Claire, Elliot and Martin. He remains a keen sportsman who likes to watch his sons play football and still plays tennis and basketball. In 2005 he was awarded an Officer of the Order of Australia and named by the State of Victoria as its nominee for the 2006 Australian of the Year Awards for his contribution to international aid and community services.