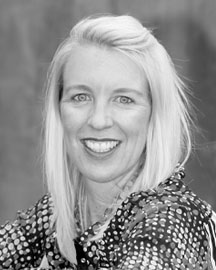 Suzy Yates is a media junkie, dog lover, endurance athlete and businesswoman. Born in 1964 she up grew in Strathfield in Sydney, the middle daughter of John and Margaret Yates.

Suzy’s media career began at just eighteen years of age, when she landed her first job presenting music programs on radio station 2GN in the southern NSW town of Goulburn. She went on to work in radio advertising sales at Sydney’s 2UE where she also presented a weekend talkback show.

While working in radio, Suzy found that many of her advertising clients would seek her opinion on their overall advertising and marketing campaigns, and she soon realised that there was a need for a complete service agency. With no previous experience, she decided to start her own PR company. Today, Bay Street Mediaworks employs thirteen full-time staff and three consultants, and has become part of the Photon Group which listed on the Australian Stock Exchange in 2004.

Suzy is a keen athlete and since beginning a fitness regime in her mid-thirties has competed the Sydney Half Marathon, the Hawkesbury Canoe Classic (a 111km event), numerous long distance ocean swims, the Byron Bay Triathlon and has hiked the Cradle Mountain Overland Track and the South West Coast Track in Tasmania.

In 2003 she accepted voluntary positions on the board’s of both Doggie Rescue (which helps save dogs from ‘death row’) and the Australian Businesswomen’s Network (which helps women take the plunge and establish their own businesses).

Whether it is charity work, training for endurance events, spending time with her three dogs, numerous nieces, nephews and godchildren or checking out investment properties, Suzy is constantly setting new business and personal challenges for herself and is an inspiration to everyone she meets.