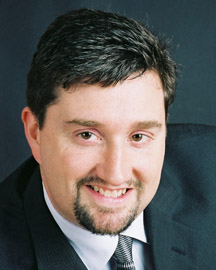 Stuart was born in Orange, New South Wales, in 1970, but grew up mostly in New Zealand and Hong Kong.

While completing his marketing degree at the University of Waikato he travelled back to Hong Kong to work during university holidays. After finishing his degree, Stuart worked in Hong Kong for five years exporting a wide variety of products to countries all over the world, including France, Germany, Norway, Sweden, Switzerland, Finland, Australia and New Zealand. The products included all sorts of things from container loads of coaxial cable and oven dishes, to promotional radios and bags.

In 1995, Stuart took a sales trip to Australia, which opened his eyes to what Sydney had to offer. As a result of his trip he sold his Hong Kong export company and moved to Sydney. After a year-long stint as a sales representative he founded Giant Promotional Products in 1997.

Giant provides promotional products to a wide range of companies in industries as diverse as IT, banking, insurance, finance and automotive. The products come from thousands available in stock, which then have logos applied and are delivered within a couple of weeks. The company also imports from China, Hong Kong and Taiwan when time allows.

Stuart lives in Sydney with his wife, Selena, and their children, Willis and Grace.