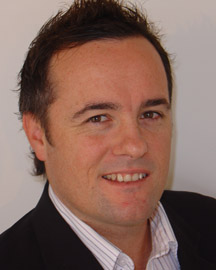 Scott Wilson was born in 1974 and raised in Christchurch, New Zealand. While growing up, Scott hated to read and admits that he went to school to eat his lunch and play cricket.

After leaving school, Scott studied a diploma in hospitality management for two years before spending the next three years travelling the world. During his travels he worked as a painter, bartender, hotel porter and cricket coach among other things, but it was while working for a small building company that Scott met a man who changed his life forever. Because of this man, Scott has since read over 400 books on sales and marketing.

The wealth of knowledge gained from these books allowed Scott to become a top-performing sales star for a large New Zealand retailer. From there he went on to work in sales and marketing for a number of large companies in New Zealand. In 2004, Scott had another defining moment that led him on a journey to starting his own business.

Scott is passionate about helping business owners and entrepreneurs make more money from their businesses. He believes that business owners deserve to make as much money as they possibly can. His passion for helping others has quickly seen him become a sought-after speaker and consultant for many businesses around New Zealand and Australia.

Scott lives in Christchurch with his partner, Nicki, who also owns two successful businesses in the fashion industry. In his spare time he enjoys playing golf with friends and reading about successful people and entrepreneurs.