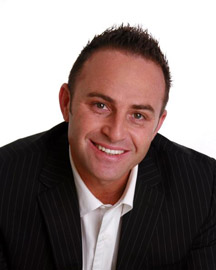 Phil Anderson was born in 1967, and raised on a dairy farm in the Macleay Valley region of New South Wales. His ‘rags to riches’ story has been a motivator for countless young Australians and his message is simple, ‘If I can do it anyone can’.

At age 18, while being questioned by his mates as to why he worked a 46-hour week, Phil pulled them in close and told them that he intended to be a millionaire by the time he was 30. Keeping true to his word, he did exactly that. His relentless efforts allowed him to retire as a self-made multi-millionaire at 38.

On his path to financial freedom, Phil also pursued his passion for bodybuilding and was crowned Mr Australia and was a finalist in the Mr Universe competition. At the same time, he also gained his international qualifications as a master life coach and today is a regular guest speaker around the world.

Phil has just opened his 20th Five Star Fitness Centre and openly admits his love for real estate. He continues to explore new and exciting markets and to give back to communities through his passion for breaking the limiting beliefs of today’s youth. He is happily married and lives in the coastal town of Port Macquarie with his wife and two beautiful children.