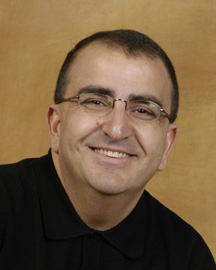 Paul Hanna is regarded as one of Australia’s leading motivational speakers with a client list that reads like a who’s who of the country’s corporate elite: Qantas, Telstra, Lexus, Vodafone and BMW are just some of the organisations that have used his services as a top sales professional. McDonald’s Australia and New Zealand and Coles Myer have had more than 20,000 managers, franchisees and staff attend his programs.

In May 1997, Penguin Books launched his first book You Can Do It! which went to number one on release and stayed in the bestseller list for a staggering six months. His following five books have all achieved bestseller status and serve as testimony to his knowledge and expertise.

Despite his success, Paul was faced with his most difficult test to date in February 2002. While enjoying his passion for bushwalking, he walked over what he thought was solid land, but was actually nothing more than brush with empty space below it. Paul fell three storeys down the cliff face, hitting three ledges, and eventually landing unconscious on the rocks below.

With doctors fearing he would never walk again and the prospect of living in a wheelchair a real possibility, Paul was faced with his biggest challenge ever. In his seventh book, Don’t Give Up!, Paul shares how he beat crushing spinal injuries to return to his passion of speaking, writing and coaching.