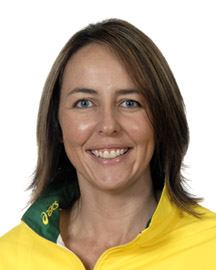 Liz Ellis was born in Windsor, New South Wales, in 1973 and grew up in a loving working-class environment with her dad, mum and younger sister.

She was introduced to netball at the age of eight and, to her parents’ surprise, loved the sport from the very first time she stepped onto the court. Initially, her ability didn’t match her enthusiasm and she spent most of her early netball career on the ground in a tangle of arms and legs. Gradually her limbs began to do as they were told and she was offered a scholarship with the Australian Institute of Sport (AIS). In 1991, she commenced both her scholarship and an arts/law degree at the Australian National University in Canberra.

After captaining the Australian under-21 netball team to second place at the World Youth Cup, Liz was invited into the Australian Open Netball Team. She has remained in the national side for an amazing 15 seasons, broken only by a six-month stint in 2006 when she was recovering from a total knee reconstruction.

Liz is the captain of the Australian and Sydney TAB Swifts teams. She is a twice World Netball Champion and has won two Commonwealth Games gold medals. Under her captaincy the Sydney TAB Swifts have won two Commonwealth Bank Trophy titles. She is one of Australia’s most capped international players and in 2005 she played her 100th test match for Australia – only one of two Australian players to achieve that feat.

Liz and her husband live on Sydney’s northern beaches, where she tries – largely unsuccessfully – to surf and play golf in her spare time.