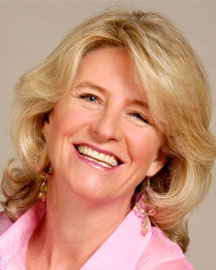 Lisa McInnes-Smith was born in Sydney in 1959. She was born without muscles in her left eyelid and was unable to open the eye until she had undergone several operations. Throughout her childhood Lisa was made fun of by other kids, which was difficult, but it developed her resilience and determination.

At 26 years of age, and in a period of hardship once again, Lisa set her biggest goal: to positively affect the lives of one million Australian teenagers. It was a goal that was to change her life. In the eight-and-a-half years it took to achieve her goal, Lisa travelled the country speaking in schools and to youth groups. Parents of those young people, also inspired by what they heard, invited Lisa to speak in their places of business, establishing her as an inspirational corporate speaker. The rest is history.

Lisa is now recognised among the top inspirational speakers in the corporate sector and speaks on stages around the world. She has written seven best-selling books and presented to over one million adults! Her influence has been recognised through her induction into the International Speakers Hall of Fame, the only person outside North America to achieve this recognition for excellence.

Lisa lives with her husband Colin, is the mother of three children and remains passionate about seeing lives changed for the better.