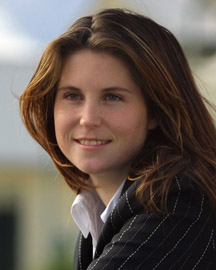 Kirsty Dunphey was born in Darwin in 1979 to a very entrepreneurial family. In fact her parents both retired in their 30’s after successfully running small businesses and having investment properties. Disaster then struck a few years later with both her parents ending up bankrupt and their marriage in tatters. Kirsty chose to use the examples, both good and bad, that she watched growing up in this environment to inspire her to pursue her own entrepreneurial goals and as such she became a self made millionaire by age 23.

Kirsty’s business experience started early – at the age of just fifteen, she set up her first two small businesses. In 2001, at just 21 years of age Kirsty became the owner and managing director of M&M Real Estate – a brand new agency, which is now a market leader in Launceston, Tasmania. It has recently joined forces with Harcourts with Kirsty and partner Tony Morrison leading this joint venture. Since its inception, M&M Harcourts has smashed many local records and now has the highest grossing sales team per person in this highly competitive area.

Kirsty is an active member of her local Launceston community and is fast becoming well-known in national real estate and business circles. She has been featured on the Today show, Today Tonight, and in Cosmopolitan, Ocean Drive, BRW and Marie Claire magazines, as well as in the Herald Sun and The Age newspapers. In 2002, Kirsty was named the national winner of the Telstra Young Business Woman of the Year Award – the youngest person to have ever received this honour.

Today, Kirsty has other business interests, loves to invest in property and recently married.