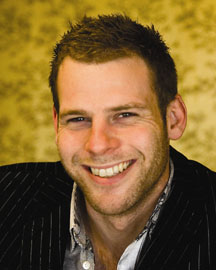 John Benton was born in Canberra in 1979 and grew up there with his parents, brother and sister. Fulfilling his lifelong goal of attending university, John began his graphic design degree straight after graduating college in 1997. He immediately connected with the principles and ideas of visual communication and soon established a number of freelance clients. While still at university, John met his business partner James Willson and founded the advertising and branding agency, CRE8IVE.

Since starting the agency at 21, John’s business skills and creative direction have been instrumental in the rapid growth of the company. In five years, CRE8IVE has grown from three to 28 staff and is now the largest independent agency in Canberra.

Despite his youth, John is recognised nationally as an entrepreneur and creative authority. He is an adviser to the highest levels of government and corporate Australia on brand development, campaign strategy and creative direction. In 2005 the Advertising Federation of Australia (AFA) named him the top advertising professional in Australia under the age of 30.

As a public speaker, John is constantly in demand to deliver presentations on business, the creative economy and government communications. Within the last year he has delivered addresses at the National Press Club, Parliament House, the University of Canberra and was a keynote speaker at the 2006 Ideas and Innovation Festival.

As a way of giving back to both the industry and the community, John is involved in a number of initiatives. He gives his time to a number of local and national organisations, and is working to increase their profile by providing strategic and creative guidance. John is also a student mentor through the Australian Graphic Design Association (AGDA).