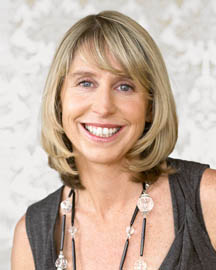 Joanne Mercer was born in Oldham, England, in 1965. In the first ten years of her life she moved countries six times before going to boarding school in Ashford, Kent. When she completed her schooling at the age of eighteen, she joined her parents who were by that time living in Melbourne, Australia.

While she was studying (arts, majoring in geography) at the University of Melbourne, Joanne held down three part-time jobs: working as a casual sales assistant in Miss Shop at Myer in the young fashion department; as a barmaid; and as a house cleaner for three families.

In 1987, after graduating, she started a traineeship with Myer where she had the opportunity to work in marketing, buying, distribution and personnel. She went on to spend two years as the customer service manager at the Myer Chadstone Store and then moved into the buying office as a trainee in the footwear division. She was quickly promoted into the role of buyer for the Miss Shop footwear division and was soon was running her own department with a turnover of $5 million. She later went on to become buyer of up-market and designer shoes at Myer.

In 1998, together with two partners, Joanne managed to secure venture capital funding to buy an existing retail business of 21 shoe stores trading in Melbourne. The purchase gave the trio the opportunity to launch their own business: Joanne Mercer footwear. Today, Joanne Mercer has 27 stores and a wholesale business with annual sales of over $22 million.

Joanne and her daughter, Samantha Jane, live in Brighton, Melbourne where they enjoy a wonderful life together. When she’s not working (which isn’t often), Joanne is a keen skier and she jogs regularly, which helps her to stay fit and keep up with Samantha.