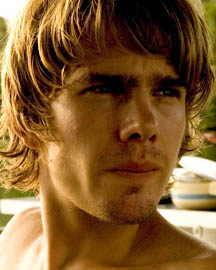 Jesse Martin was born in 1981 in the German town of Dachau while his parents Kon and Louise were traveling through Europe in a kombi van. When they returned to Australia with Jesse and younger brother Beau the family began a new life in the Daintree Rainforest of far North Queensland. But not long after, the marriage broke down and Louise returned to Melbourne with the two boys.

Jesse first learnt to sail with his father. When he was fourteen, Jesse and his brother joined their father on a two-month adventure sailing a fourteen-foot catamaran from Cairns to Cape York. This was where Jesse’s dream of sailing around the world was first born.

Returning home he began applying for sponsorship to become the youngest person to sail non-stop, solo and unassisted around the world. His requests were rejected because of his little experience. The following three years saw Jesse embark on a five-week kayaking expedition in Papua New Guinea and crew on a yacht sailing from Believe to Tahiti for three months. Returning home from the South Pacific feeling confident in his experience, Jesse put school on hold and for most of 1998 tried again to get sponsorship to sail the world. It wasn’t until Louise mortgaged their house to purchase the yacht that sponsors took note and backed his journey.

From December 1998 to October 1999 Jesse spent almost eleven months alone at sea on his yacht, Lionheart. Having achieved his dream, Jesse became a household name and the documentary of his journey was aired on national television. In 2002 Jesse set off on another ambitious journey aboard the Kajana, but as he explains in his book of the same name, this journey wasn’t destined to have the same fairytale finish as his first one.

Today Jesse leads intimate expeditions aboard his 38-foot Polynesian Catamaran, Imajica, through the islands of Papua New Guinea that he first kayaked almost a decade ago.