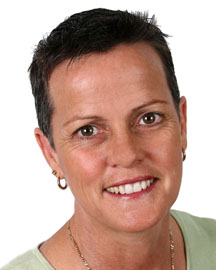 Jennifer Jefferies was born in Inala, a western suburb of Brisbane, in 1961. The second eldest of five children, Jennifer was always interested in pulling things apart to find out how they worked or how she could fix them.

At the age of 12 Jennifer decided that she wanted to join the Queensland Police Force as a cadet but found out that she was too short. At 15 she left school and worked in her family’s service station until she was old enough to enlist in the Australian Army.

After three years’ service, Jennifer resigned and worked in positions that called for ‘street smarts’, working her way up into management positions until finally she burnt out. At 28, she reinvented herself and studied natural therapies. She has since become one of Australia’s best-known authors and speakers.

Today Jennifer speaks to corporations throughout Australia, Taiwan, China, Hong Kong, South Korea, the United States, Europe and New Zealand. She shares practical real-life strategies that help people to improve their health, wellbeing and productivity by finding balance in their lives. Jennifer is a refreshingly down-to-earth, engaging and informative speaker who leaves her audiences feeling empowered about the things they can do to achieve balance in their lives, rather than feeling guilty about what they’re not doing!

Jennifer is the author of 7 Steps to Sanity® and seven other health-related titles which are sold throughout the world, having been translated into four languages. When Jennifer is not travelling she can be found hanging out with her partner, Toni, and their two cats on the Gold Coast, or riding her beloved motorbike with the guys and girls from the Gold Coast Cruiser Motor Bike Club.