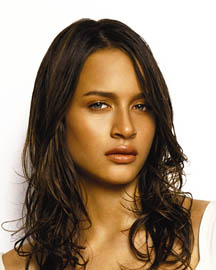 Ilona Novacek was born in 1989 and grew up in the inner Sydney suburb of Newtown. As a child Ilona loved performing in jazz, tap and ballet at the famous Brent Street Studio.

At the age of twelve, while a student at Newtown High School of the Performing Arts, Ilona was discovered by a scout from Scene Model Management, which signed her immediately.

Because she was so young, Ilona’s modelling career began slowly with small jobs on weekends and in the school holidays. As she matured, more opportunities arose and she soon attracted the attention of Dolly and Girlfriend magazines, as well as other world famous models such as Naomi Campbell. At the age of fifteen, Ilona and her mother relocated to New York to further her career by making it easier to travel to the other fashion capitals of the world.

Within months of relocating, Ilona was gracing the pages of Vogue, Harpers Bazaar, and Marie Claire, and working for labels such as Dolce and Gabbana, Fendi, Calvin Klein, Dior, Robert Cavalli and Bottega Venetta.

Still a student at the Professional Children’s School in New York, Ilona says she likes to take each day as it comes and not take herself too seriously. When she is not travelling, studying or working in some exotic location, Ilona enjoys keeping fit, playing basketball and staying in touch with her friends and loved ones back home.