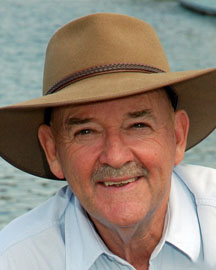 Ian Kiernan was born near the shores of Sydney Harbour in 1940, and grew up learning to swim, fish and sail on his favourite waterway.

Educated at The Armidale School in northern New South Wales, Ian then joined the construction industry, specialising in historic restorations. Throughout his life, he has been a passionate yachtsman, sailing competitively for more than 40 years.

In 1986/87, Ian fulfilled a long-held dream by representing Australia in the BOC solo around-the-world yacht race. He finished sixth out of a fleet of 25 yachts from 11 nations, setting an Australian record for a solo circumnavigation of the world. It was during this race that Ian saw, and was appalled by, the amount of rubbish choking the world’s oceans.

After returning to Sydney, he organised a community event with the support of his friends – Clean Up Sydney Harbour – on Sunday 8 January 1989. Over 40,000 volunteers turned up to lend a hand. Based on this success, the first Clean Up Australia Day took place the following year with more than 300,000 Australians volunteering their time to help make a difference to the health of their local environment.

Ian has received numerous Australian and international awards, including being named Australian of the Year in 1994. He and his wife, Judy, have two daughters, Sally and Pip.