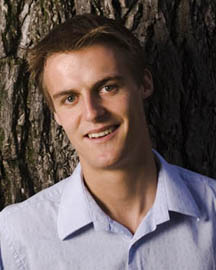 Hugh Evans was born in 1983 and grew up in Melbourne as the middle child of three boys.

Hugh is the founder and director of The Oaktree Foundation, an entirely youth-run international aid and development organisation. Since its inception, the organisation has mobilised more than 3,000 young volunteers and supporters across Australia, South Africa, the USA and the UK, and has raised over $500,000 to support projects in South Africa, Ghana, The Philippines and East Timor. Oaktree is also engaged in local projects focusing on Australia’s indigenous population and immigrant groups.

Hugh’s advocacy work in the aid and development sector has taken him to more than 25 countries around the world, including The Netherlands (where he represented Australia at the 2001 International Model United Nations Conference); South Africa (where he worked for one year in 2002 as the inaugural World Vision Youth Ambassador and participated in the World Congress on Children’s Rights); the USA (where he spoke at a HIV/AIDS conference); Japan (where he spoke to the Junior Chamber International in 2004); Ghana (where he led the 2005 Oaktree Study Tour); and Israel (where he studied the NGO and youth sectors as part of the 2006 National Australia Bank Yahad Scholarship).

Hugh is a keynote speaker for business groups around Australia, and the author of Stone of the Mountain: The Hugh Evans Story, which recounts the year he spent living and working in the poverty-stricken communities of Kwa-Zulu Natal in South Africa. He is currently working on his second book titled, Just STAND.

He is also studying Law/Science at Monash University in Melbourne and loves cross country running, hiking and spending time with close friends.