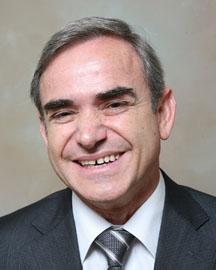 George Faddoul grew up in Alexandria, Egypt. He attended College Saint Marc, a school built and managed by Les Freres De La Salle and all of his schooling was in French. He came to Australia in 1967.

He worked in the banking industry for eight years, where he developed his finance and customer service skills. During this time he took an 18-month break to complete his National Service for Australia. After leaving banking, George switched to the automotive industry and quickly became the top salesperson for a company that had 12 car dealerships.

Five-and-a-half years later, he started his own used car outlet which operated very successfully for nine years. Deciding to take a break from cars, he spent 12 months with his family on the French Riviera, and another two years developing real estate and dealing in Australian art. Refreshed from his break, George started two new car dealerships, which operated successfully for another eight years.

Due to his thirst for practical knowledge and his insatiable appetite for personal growth and development, George became a master practitioner and trainer of Neuro-Linguistic Programming (NLP), Time Line Therapy and hypnosis. Since selling his dealerships and becoming a full-time trainer, George has trained thousands of people in Australia and overseas. He is a dynamic presenter on a wide range of topics, from personal growth to powerful sales training.

George loves to travel, and enjoys the company of motivated people.