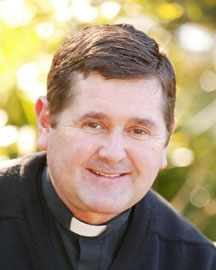 Chris Riley was born in Echuca, Victoria, in 1954. Growing up one of five children on a small dairy farm, he was chronically shy and a real loner.

In 1973, Chris graduated from a school that was run by the teaching order of Catholic priests, the Salesians. He went on to train as a teacher and immediately showed a talent for communicating, especially with disruptive children.

Following his ordination in 1982, he combined teaching with working in poorer neighbourhoods. While working as a teacher, Chris set up a refuge for kids at risk at the back of a Melbourne school and spent every night on the streets feeding and looking after homeless children.

He quit his school job in 1991 and moved into a homeless men’s hostel so that he could work on the streets full-time. Shortly after he managed to raise enough cash to set up a refuge for homeless children. Gradually, his work with children with problems – abusive parents, sexual violence victims, drug and alcohol addictions – became increasingly successful.

Today, Chris’s nationally acclaimed Youth Off The Streets organisation runs a huge, multimillion-dollar array of enterprises from residential farms in the country, to a detox centre, food vans, schools, mentoring programs and programs for kids who have endured a lifetime of neglect and abuse. More than 60,000 children have passed through his projects.

Chris has frequently been recognised for his service to disadvantaged youth. In 2006 he received a Human Rights Medal from the Human Rights and Equal Opportunity Commission and was honoured in the Queen’s Birthday Honours.

His two best-selling books, Mean Streets, Kind Heart and World Beyond Tears, have told the story of his work in Australia and among some of the poorest children in the world.