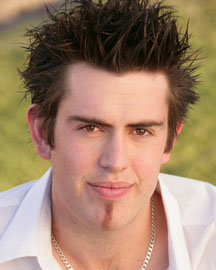 Darren Lomman was born in Fremantle, Perth, in 1983. From a young age he showed a natural fascination for how things worked. After finishing high school, he followed this natural interest and studied engineering at The University of Western Australia (UWA).

While studying at university, Darren met a man named Shane who had become a paraplegic through an accident. During their meeting a passion for motorcycles was shared in a moment that inspired Darren to undertake a project to fulfil Shane’s intense wish to one day ride a motorcycle again. For the next three years, Darren invested over 4,000 hours in designing and building a hand-controlled motorcycle that could be ridden by a person with paraplegia.

Building on his success with the hand-controlled motorcycle, and after completing his engineering degree in 2005 Darren started his business, Dreamfit. Dreamfit continues to engineer solutions to help fulfil the dreams of people with disabilities. Shortly after starting the business, he negotiated an alliance with UWA to enable other engineering students to become involved in projects designing equipment for people with disabilities.

Darren’s vision is to diversify Dreamfit’s disability engineering solutions beyond recreational equipment and into other service areas such as housing, vehicles and medical equipment. His ultimate dream is to become involved in medical research in areas such as spinal cord research.

Darren is recognised as a passionate and dedicated advocate for people living with disabilities. He has received numerous accolades and awards including Young Australian of the Year (WA) and Australian Young Biomedical Engineer of the Year. Darren is also the founder of the DisAbled Recreation Club and finds the time to volunteer with a variety of organisations, such as the Disabled Surfer’s Association, and to take people with disabilities sailing on the Leeuwin sailing ship.