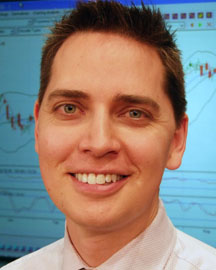 Daniel Kertcher was born in Toronto, Canada, in 1972. At the age of 16, he moved to Australia with his family. After finishing school he studied a Bachelor of Science, majoring in neurophysiology (brain research), at the University of Queensland.

In 1994, Daniel was going to commence a PhD study in neurophysiology but decided to become a licensed real estate agent instead. He opened an agency with his mother and soon became involved in most facets of property: development, investment, onsite management, sales and maintenance.

In 2001, Daniel sold his shares in MetaShare and started his current business, Platinum Pursuits. Platinum Pursuits is an Australian-based stock market education company that specialises in teaching clients how to trade international stocks, options, CFDs and futures markets. By 2004, he was conducting his training seminars to huge audiences in Australasia, Europe and North America.

Over 70,000 people have attended Platinum Pursuits seminars in 22 different countries, with over 10,000 people continuing on to complete the various advanced courses.

Today, Daniel spends approximately four to five months a year conducting courses internationally. The rest of the year he spends with his family and on leisure, investment, business, spiritual and charity interests.