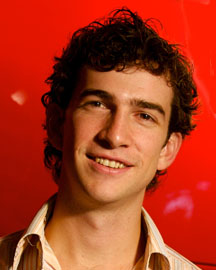 Daniel Joyce was born in Brisbane in 1979, and is the youngest child in a very close-knit family. After finishing high school in 1996, Daniel completed a Bachelor of Commerce and Law (with honours) at the University of Queensland and then stayed on another year to achieve first class honours in finance.

During his time at university, Daniel and his best mate started a niche staffing agency providing bar and wait staff to the hospitality industry. The business quickly grew to have more than 25 casual staff and served as a fun distraction to his university studies. Daniel sold the company to another Brisbane-based staffing agency, which allowed him to fund a four-month world tour before starting full-time work.

In 2002, Daniel moved to Sydney to work in Macquarie Bank’s merger and acquisitions team. He worked on many big-ticket transactions before reading a book that enlightened him to an important truth: he was an entrepreneur! In late 2004, Daniel’s housemate spoke of DVD vending machines, which attracted Daniel’s attention given that the dispensers had not yet been trialled in Australia – this was just the opportunity he was looking for. What ensued was a six-month feasibility study that resulted in the launch of Red Room DVD.

Together with his business partner, Nic DiVenuto, Daniel raised $1 million in capital to open the first Red Room DVD store in Waterloo, Sydney, and quickly followed it up with a second store in Bondi Junction. There are currently eight Red Room DVD stores in Australia – a combination of company-owned and franchises – with over 12,000 members.

Daniel lives in a share house in Paddington, Sydney, with Nic and two other friends. He is a keen kayaker and snowboarder, loves cheese and chocolate and relaxes by watching DVDs (of course!).