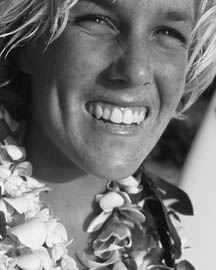 Chelsea Georgeson was born in 1983 and grew up surfing at Sydney’s Avalon Beach. It was there as a fourteen-year-old that she was spotted by four-time world champion, Lisa Andersen, who recognised Chelsea’s raw talent and quickly signed her to the prominent women’s surfing team, Roxy.

Shortly after placing third in her first ever surfing contest, Chelsea went on to become both the under-nineteen World Grommet Champion and the International Surfing Association (ISA) World Champion. In her first year on the ASP (Association of Surfing Professionals) World Championship Tour in 2002 she finished a creditable eighth.

In the following year Chelsea won her first World Championship Tour (WCT) event, the Roxy Pro, in France, beating world champion Layne Beachley in the final. This gave her the confidence that she could not only match it with the best but that she could actually win.

In 2005, Chelsea scored a perfect ten-point wave to win the Roxy Pro Hawaii and jumped to first place on the ASP world ratings at Ali’i Beach Park in Haleiwa. In the last event of the year, she held on to become the 2005 World Surfing Champion and fulfil a childhood dream.

Today Chelsea lives in Tweed Heads, just outside Queensland’s Gold Coast with her husband Jason, but travels frequently to compete all over the world. When she’s not surfing, Chelsea enjoys cooking, good music and relaxing.