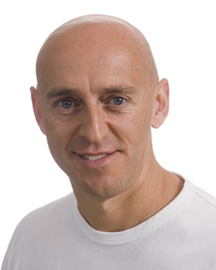 Brett McFall was born in Sydney in 1970, the youngest of three sons to Irish immigrants, and grew up in Emu Plains at the foot of the Blue Mountains.

He left school at 18 after completing his HSC. Having failed English he couldn’t pursue his goal of studying psychology at university, so he accepted a job with the in-house advertising department of a leading electronics company. It was there that he discovered the skill of writing advertising. Over the next 14 years he wrote more than 10,000 adverts, sales letters and websites for 153 different industries.

In 1998 he started his own monthly eight-page newsletter called the Brett McFall Advertising Letter, which taught business owners how to write their own advertising. He turned the initial 12 issues into his first course – Inside Secrets Of Advertising. The course was self-published and sold by direct mail for $397.00. Over the following two years he made more than $400,000.

In 2002 Brett started his own business writing copy for small business owners, offering clients a money-back guarantee if his adverts did not return profits that were ten times more than his copywriting fee. Within two months he had business owners depositing $10,000 a week into his bank account just so that he would write for them. No one has ever had to take him up on his guarantee.

Brett created more courses that taught business owners his copywriting methods and in 2004 he co-created The World Internet Summit, a multimillion-dollar company that is the biggest internet business event in the world, with yearly events all over the globe.

Today Brett lives on Australia’s beautiful Gold Coast in Queensland. And when he is not online, Brett can still be found surfing.