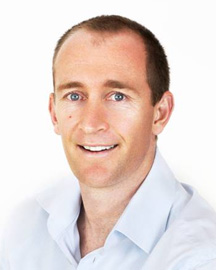 Andrew May was born in Wagga Wagga, New South Wales, and grew up living and breathing sport. Soon after learning to walk he was trying to run, and this approach to life did not change as he got older. He competed at representative levels in athletics, swimming, rugby league, rugby union, touch football and tennis.

Andrew left the country after finishing school in Dubbo and then headed to Sydney to study sports coaching and exercise science. After graduating, he moved to Hobart (when his athletics coach accepted a job with the Institute of Sport in Tasmania) in pursuit of his dream to one day represent his country running at the Olympics. He spent the following five years chasing this dream and building a successful health and wellbeing business. Andrew did attend the Olympics – as a spectator, not a competitor – at which time he decided to give business a proper go. He moved back to Sydney and formed Good Health Solutions. The company is now Australia’s largest corporate health and wellbeing consultancy and employs over 100 full-time staff members.

While building Good Health Solutions, Andrew maintained his involvement in sport and worked with the NSW Cricket Team, AFL players, Olympic athletes and gold medal performers in track and field, swimming, basketball, netball, hockey and tennis. Andrew left Good Health Solutions and for 12 months took on the exciting role of physical performance manager for the Australian cricket team. He is now considered one of Australia’s leading experts on performance and presents keynote presentations around the world, coaches CEOs and senior managers, writes for magazines and is a regular voice on radio. His other business, PT Plus, mentors health and wellbeing business owners around the globe on how to make more money and improve business efficiencies.

Today, he lives in Malabar, Sydney, with his lovely wife, Nina, and when he isn’t working you’ll find him running with his Rhodesian Ridgeback, Cougar, paddling a kayak, mountain-biking and wakeboarding with his mates, or cooking up a mean barbeque in the backyard.