How Jack and Harry Carew Found the Blueprint to Success 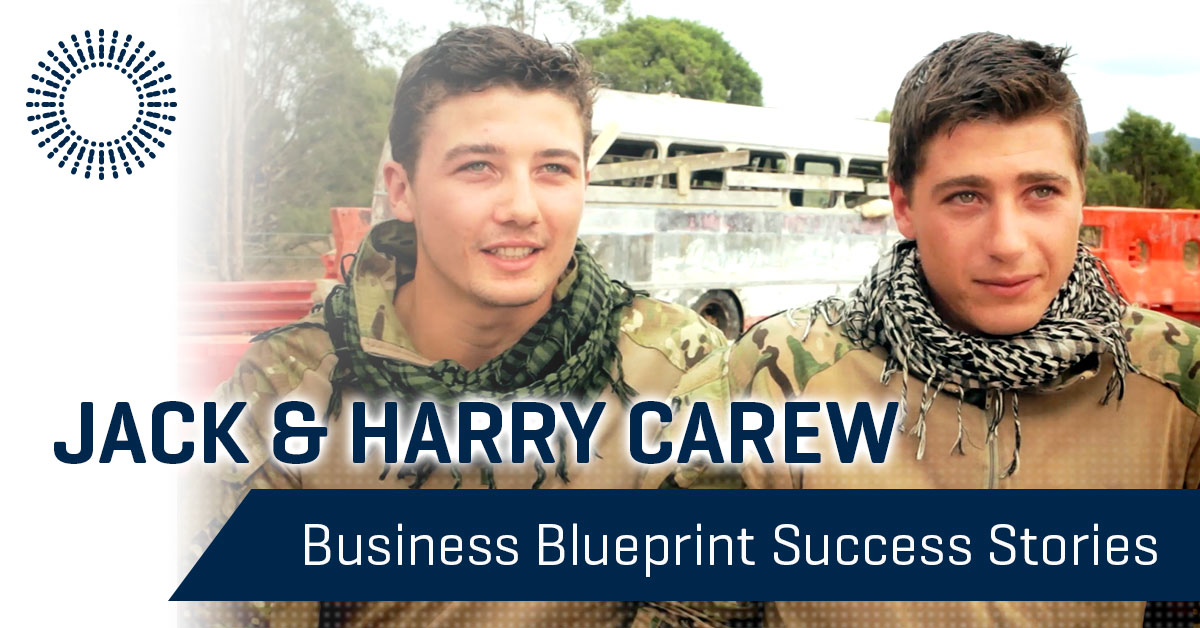 What do you get when you’re not happy with a particular service or facility? For brothers Jack and Harry Carew, they decided to do more than just give feedback. They opened their own business.

Avid paintball players, Jack and Harry, had been doing the sport for years. However, they were unhappy with the lacking team play available. So they decided to open their own paintball facility.
Copy the link below to embed on your website or share this on social media

Learning on the Get-go

Jack and Harry were only 21 and 23 respectively when they started Tactical Ops Paintball. Their mother Tonya who had attended Dale’s New Rules of Business course, was very supportive. She enrolled her sons in the Business Blueprint program, claiming it was the best decision she ever made.

The day they opened was also the day they signed up so Jack and Harry learned on the get-go. Before Business Blueprint, the brothers had no idea about marketing. All they did was word of mouth, posters, and flyers. But once they discovered the latest marketing strategies, they were quick to embrace the change in tactics.

“In the first conference we went to, we learned how to optimise online,” Jack revealed.

The timing was perfect as they were just in the process of putting their website together. Jack and Harry set up a lead magnet on their website, sending an email to anyone who avails of their free offer.

In their third conference, the Carew brothers learned about Facebook Marketing and that completely changed their business. When you download the free offers via the Facebook page, you get sent another email after you opt in a smart form.

According to Harry, it’s all about building trust. Through Ontraport they send out interactive emails where you can click buttons or watch videos. Blog posts lead you back to their website.

The Facebook tracking pixel was also a great help in tracking and making sure their ads show up in potential clients’ newsfeed. Jack and Harry didn’t need to manually search for people now that they’re hitting their target audience. They were getting 80% of their conversions through Facebook and 20% through their website.

The Blueprint for Success

The boys’ mother, Tonya Carew reaffirmed how Business Blueprint has been good for her sons. “The boys have business heads on their shoulders because of their exposure to the program – no University could have matched what you offer.”

Four months after the Carew brothers started their business, Tactical Ops Paintball scored the top position in a Facebook poll on Ipswich’s best new businesses. Currently, their Facebook page has over 31,000 fans and boasts a 4.9-star rating.

“It’s awesome to see what you learned and apply it in practice and see it work for you,” Harry admitted.

The siblings’ success has opened up new opportunities for both. Harry has moved on to become the SME Business Account Manager at Facebook in Singapore while Jack continues to run Tactical Ops with their other brother Ben and sister-in-law Alexis.

Jack echoed his brother’s sentiments saying, “I wouldn’t know where I would be now if I didn’t join the program.” In a new testimonial video, the younger Carew brother shares how much Tactical Ops Paintball has grown in the last three years.

“Last year, we experienced an insane amount of growth,” he revealed.